I wanted to sleep in a little bit today, but my dog Sergeant Margie wanted to get up to pee at 5:30 am. So, I let him out and went back to bed. Then he sat on the bed staring at me: he also wanted his breakfast. Hah! It’s a good thing he’s so cute…

I got up again and fed him.  And then since I was up anyway, I got dressed and headed out to the Effie Yeaw Nature Preserve for a walk.  It was 39º at the house when I left, and 37º at the preserve when I arrived.  As the sun came up, it stirred up some ground fog and mist; I stopped several time just to watch the steam rising from the bark of trees and stumps.

I saw a lot of deer today, including a spike buck (one-pronged antler), a buck with a broken antler (The rut was apparently pretty rough on some of the boys this year.), 2 bucks with oddly matched antlers, and a handsome 3-pointer who was nosing around a receptive doe.  I followed that pair for a while – making sure I never got between the buck and the doe – but they wandered off into the thicket and I eventually lost sight of them.

There was one spot where I came across some does sitting out in the grass in the morning sun. I was  able to get within just a few feet of them. And I noticed that one of them had stashed a fawn in the higher glass to my right. As I was taking photos of them, a third doe appeared, followed closed by one of the bucks with and odd set of antlers.  One antler was full-size but was “swooping” and spoon-shaped at the end, and the other was completely stunted. At first I thought maybe it was broken, but the terminal end of it was too smooth… This buck also walked with a distinctive limp.

Antler abnormalities are somewhat common, but because they’re all so different, it’s hard for scientists to determine the exact cause of them. Some antlers can come out misshapen if the pedicle (the point where the antler fits onto the head) is damaged or just grows in a weird shape. Others can look odd if damage is done to the antlers when they’re in the velvet stage (as they’re forming), and for some reason, misshapen antlers is also often associated with damage to the buck’s hind leg. In the same area as the limping buck, I saw another one with a mismatches pair of antlers: one had four points and the other only had two… [[As an interesting aside, I also read that hunters had come across what they thought were female deer with antlers… but genetic testing on the deer showed that although the deer had external female parts, they were actually genetically males.  Transgender deer.  Who knew?!]]

After a short while, all of the deer in that area startled. I knew they weren’t responding to me because they could all see me and had allowed me to get close, so I looked around to see what might have set them off.  And then I saw a thick-coated coyote chasing after a jackrabbit. His rushing path took him right past the deer.  The females all jumped up onto their feet and ran to where the fawn was sitting in the grass and surrounded him until the coyote was out of sight.  I wish I had been able to get that on video…

It’s interesting to me how different deer react differently to my presence. Some ignore me or let me come within touching-distance of them; others run away stotting as they go; and other try to “hide” between trees or clumps of grass while all the while keeping an eye on me.  Makes for some thought-provoking photo ops.

At another spot along the trail, I came to the tree that had held the wild bee hive for a few weeks (before the queen took off to find another spot). The opening in the tree is still surrounded by the bees’ “propolis” (hardened wax and plant resin the bees chew and then build up around the exterior of the hive to stave off bacteria) and I could see insects flying into and out of the hole… not as many as when the bees were there, but still a presence.  I walked up to the tree to check it out and found a lot of black ants crawling around the opening.  They were joined by several Yellow Jackets.  Having been stung already this year by the wasps, I kept back away from the tree, but took some photos and a little bit of video.  The wasps were obviously checking the spot out (if they hadn’t already moved in.) Nice of the honey bees to make the place inviting to them.

I also saw quite a few Wild Turkeys today, along with Acorn Woodpeckers, California Scrub Jays, a male quail, Dark-Eyed Juncos and a few other birds. The surprise for me today, was seeing some male Goldeneyes in the river, diving and fishing around one another.  They were too far away for me to get any really good photos of them, but it was nice to see them… It means all of the migrating waterfowl are moving into the region.

I walked for about 3 hours and then headed back to the house. 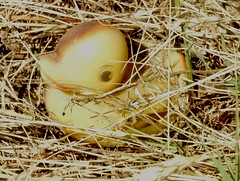 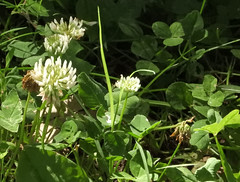 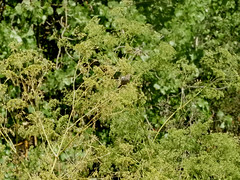 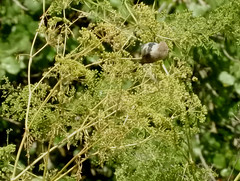