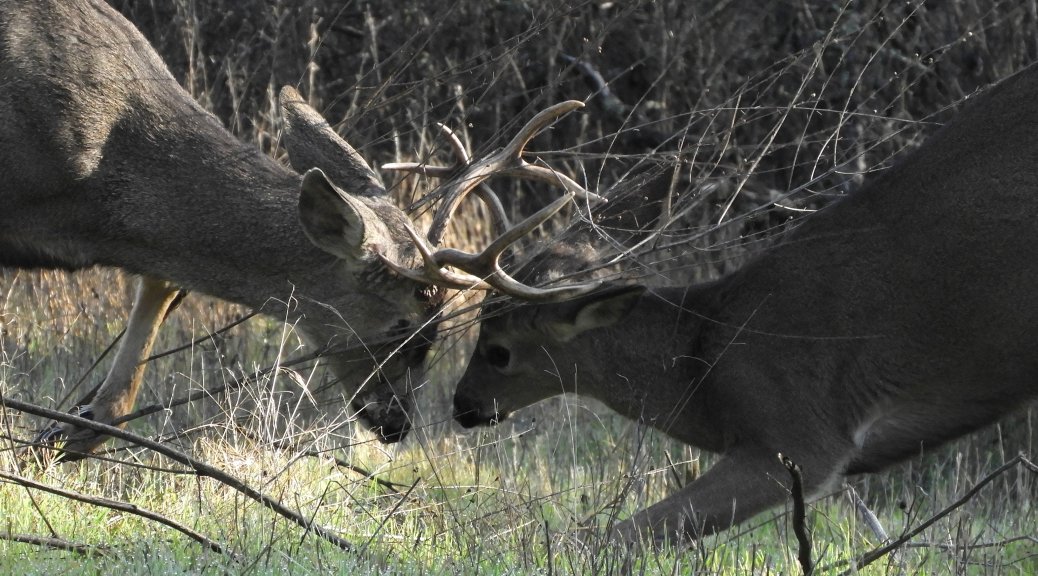 Up at 5:30 am to let the dog out to pee, then we went back to bed for about an hour before I got up again and went over to the Effie Yeaw Nature Preserve for a walk.

It was literally freezing, 32º, at the river, and much of the preserve was covered in fog. The fog was very thick at the river side, which made for some interesting photos, especially as the fog started to lift as the sun came up further in the sky. There was a Great Blue Heron sitting on the bank among some scraggly vegetation. He remained still for quite a while and I was able to photograph him from different sides. He kept an eye on me, but remained where he was, trying to warm up before flying anywhere I guessed.

The majority of the rest of my photos today were of the Mule Deer. I came across the big 4-pointer buck who was tailing a female, and later came across three younger bucks (two 2-pointers and one spike buck) all sparring among a group of does (who pretty much ignored the boys). I was able to get some video snippets of the sparring contests, and also got some photos but those were more difficult because when the bucks spar, they drop their heads down close to the ground and shove each other back and forth… and when the vegetation around them is kind of tall, I’d lose the bucks in it. Every now and then, though, the bucks would lift up their heads and pose, looking handsome. I got quite a few of those shots.

On my way out of the preserve I found a spike buck browsing in the tall grass, but close to him, just to his left, was a California ground Squirrel gathering up face-fulls of grass and other vegetation to use as nesting material. This is kind of early for them to be breeding in this area, but not unheard of. In Southern California they start breeding in December, and in the Central Valley they usually don’t start until February and then go through April. Changes in breeding seasons is part of what I’ll be able to study more and understand better after I get certified in the phenology course…