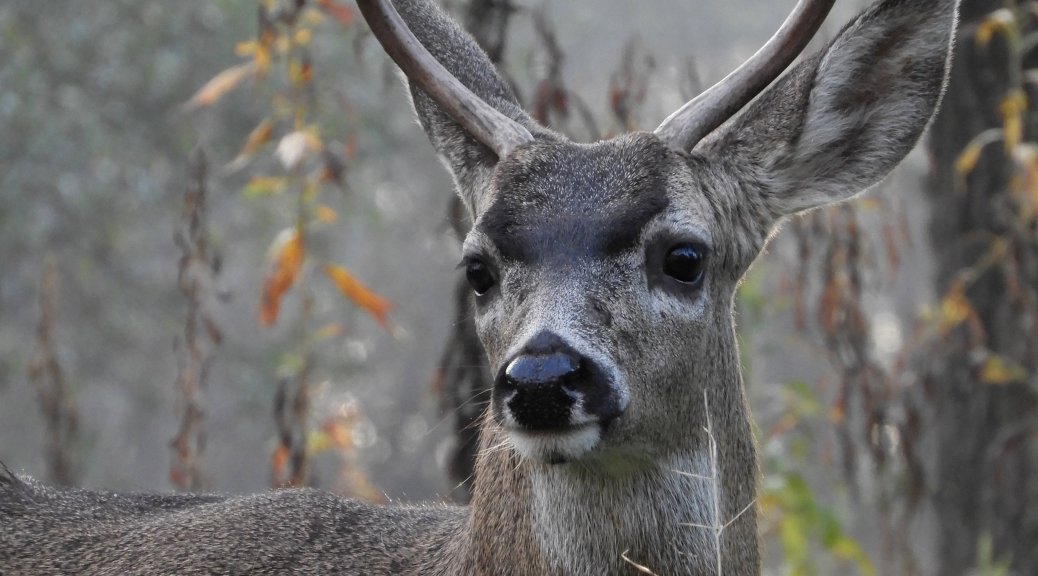 Around 6:30 am I headed over to the Effie Yeaw Nature Preserve for my first walk of the new year. It was 37º outside, and the sky was full of little tight-fisted clouds. There was some ground fog here and there, but not a lot. Got up to about 61º by the late afternoon.

It was very much a “deer day” today. I hadn’t walked more than 100 feet from the trailhead when I came across a spot where a lot of young bucks were just waking up. They stretched and peed and sparred and had some breakfast. Within just a few minutes I had taken over 300 photos! (Keep in mind that a lot of them are sort of “duplicates”, taking about 3 or 4 shots in succession – but still… Wow.)

I saw one of the boys reach his head up into a tangle a low-hanging branches and vines and rub his head and face all over them. I think he was both trying to get an older buck’s scent off of the branches, and put some of his own on them. The male deer have a scent gland right between their antlers (that the females don’t have) and they rub their forehead against trees and other outcroppings to mark their ill-defined territories, and announce to the females (and other males) just how mature and potent they are.

The bucks near the trailhead were all 2-pointers, and had settled down into a bachelor group to sleep for the night. There were no females around them, so all of their sparring was more for one another’s benefit than to impress the gals. I later came across the big 4-point buck, who seemed to have gotten himself a tiny harem of two receptive females. He wasn’t very accommodating today – on the move a lot — so I didn’t get very many photos of him.

In another area, I found a lot of females, many with their fawns. The fawns are all out of their spots now and getting bigger by the day, but they still like getting groomed by their mamas. This group was mostly in the shadows, so it was hard to get any good shot of them, but I did get a few…

There were also quite a few cooperative California Scrub Jays and Wild Turkeys out today, too, and I was able to get quite a few shots of them. I was also surprised by all of the Turkey Vultures around this morning. I even came across a pair sitting side-by-side on a branch, with one of them hunkered down so it was laying on the branch. And nearby were ones doing their outstretched-wing “heraldic” pose, trying to warm up in the early morning sunlight.

In the river, I caught sight of a small flock of Common Goldeneye ducks; mostly males and one female. They’re “nervous” birds, though, and take off at the slightest provocation, so they were gone before I could get to the shore.

I did get some photos of a male Nutthall’s Woodpecker, though. I’ve gotten to the point where I can distinguish the rapping sound of the Acorn Woodpeckers from other woodpeckers… The Nutthall’s rapping sound is “lighter” and quicker than the Acorn’s… So I followed the sound and was able to find the Nutthall’s high over my head, hanging upside down on the underside of a branch, pecking away…

The most irritating sighting of the day was of a fisherman standing in the river with his unleashed dog beside him. Effie Yeaw is a nature preserve; it’s illegal to fish anywhere near it. There are signs all over that say that, but some people feel they can just ignore the law. This is why we can’t have nice things.

I walked for about 3½ hours, and then headed back home.