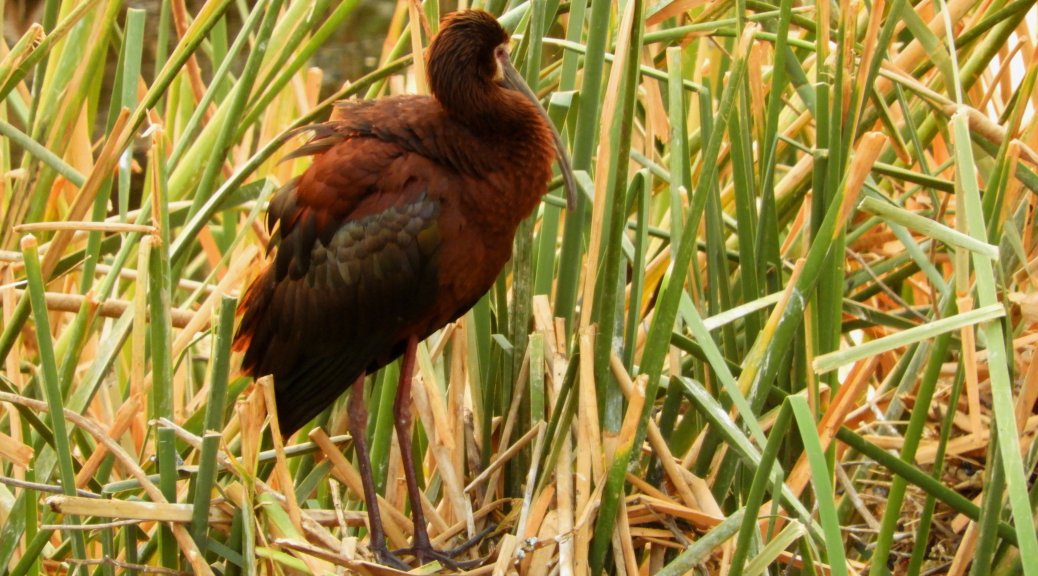 The dog and I headed out right away to go into Woodland and look for the water treatment plant before going into the office. One of my naturalist course graduates, Sonjia, had told me there was an Ibis rookery there, so I had to go see it!

Luckily the main gate was open.  I overshot the pond area and had to turn around, then went down the gravel road, and took photos from my car and the adjacent field. The air quality was horrible this morning, with all of the wildfires burning around the valley, so everything was tinged an extra shade of red-orange.

At first, I only saw flocks of White-Faced Ibis, Black Necked Stilts and a few other shorebirds, but as I watched I could pick out other individual birds like Tricolored Blackbirds and Yellow-Headed Blackbirds, Killdeer, Mallards, Pied-Billed Grebes, Canada Geese and Great-Tailed Grackles.  Some of the grackles were posturing and “dancing” along the side of the road. One of them kept stepping on the tail feathers of the others to mess them up. Hah!  I also found some damselflies who weren’t warm enough to go anywhere yet, so they clung to the stems of the star thistle, sometimes several of them on the same plant. Lots of photo ops… but I felt rushed because I had to get to the office by 7:00 am.

A little further along the gravel road was the rookery area itself, with Ibis practically piled on top of one another in their twiggy nests.  Because it was so early in the morning, most of the adults on the nests weren’t quite awake yet, but in some of the nests, parents were busy feeding hungry hatchlings. If I come back again later in the week, I’ll come a little bit later in the morning when more of the birds are awake.

I was able to see some of the unhatched eggs in nests; they’re a beautiful turquoise blue color. Both parents help to keep the eggs warm. Some evidence seems to indicate that the males sit on the eggs during the day, and females sit on the eggs in the evening, but they can also switch shifts. Both parents also feed the babies (by regurgitation). While I was watching one nest, I saw mom feeding the kids. Then dad flew in, gave mom his breakfast, and flew off again… and mom fed what dad brought to the kids. Lots of barfing and re-barfing going on in that exchange. Eeew! Hah!

The pairs of adults are supposed to be monogamous, but I don’t know if that’s for life or just for the breeding season.  I saw several pairs, some of them interacting very gently with one another. “Allopreening” (mates preening one another) is supposed to reinforce the pair bond.

The baby Ibises have black and white striped beaks and bald heads. They’re so funny looking! And they grab at the parent’s beak to try to get them to open their mouths. Pushy, fussy babies.

In some spots, the female Great-Tailed Grackles were poking around the Ibis’ nests and harassing them. One of them poked its head right in under a mama Ibis who was sitting on the nest, causing her to jump up and turn on it.  It’s not unusual for the grackles to be predatory and try to steal eggs from the nests, but this one was awfully bold!  (I wonder if the Black-Crowned Night Herons come by in the evening to steal babies and eat them… They’re notorious in this area for stealing and killing local Wood Duck ducklings; sometimes killing for no reason and leaving the ducklings bodies lying around.)

I was out there for about an hour and then had to head off to the office, but that was cool way to start my day.