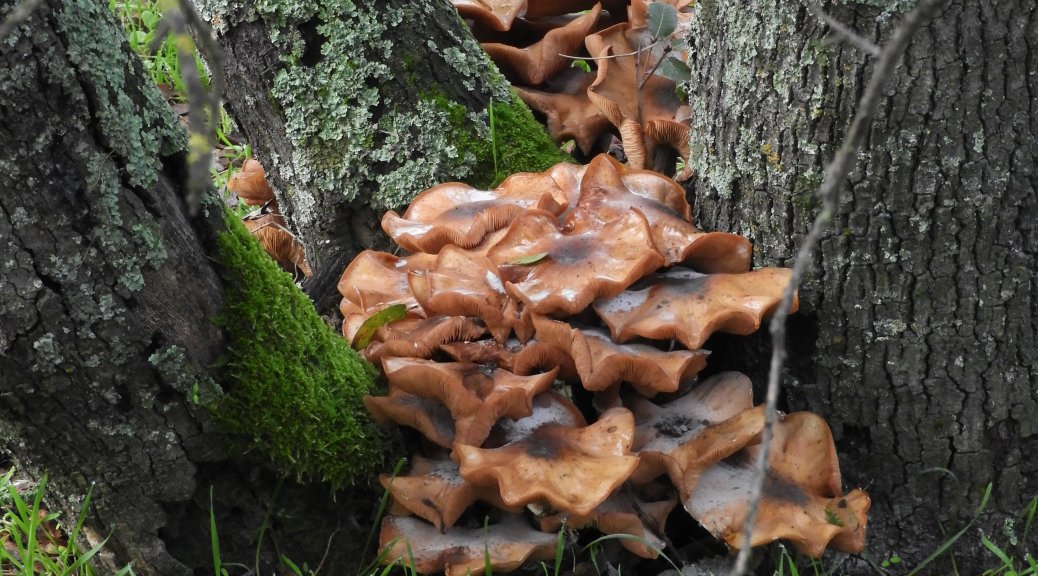 Around 8:00 am I headed over to the American River Bend Park for a fungus walk.  It was overcast and foggy when I got there, but the clouds broke up a bit by the late afternoon.  It was 47° when I got to the park, and around 53° when I left.

Some of the spots that had been my go-to places for fungi at the park went through forest fires this year, so they aren’t producing a lot this year.  But I was still able to find some fungi throughout the park (even though it’s also still relatively “early” in the season) including two kinds of jelly fungus, several different species of mushrooms, some polypores and bracket fungus, puff balls, and several species of crust fungus.  As before, there were also huge stands of Honey Fungus all over the place.  I also came across what I think was a kind of slime mold, but I haven’t identified it fully yet. I think it’s Physarum leucopus,the Many-Headed Slime Mold, also called White-Gray Button, but I’m not certain. It was tinier than other specimens of the mold I’ve seen before.

I was hoping to find some coral fungus and maybe a specimen of cauliflower fungus, but no such luck.  I’ll keep looking though.

Many of the mushrooms had visible hyphae at the end of the stipe (or attachment to the substrate.) “…Hypha, each of the branching filaments that make up the mycelium of a fungus. Mycelia are simply collections of hyphae that are abundant enough to form a visible mass. Fungi can appear to be marvelously complex things, producing mushrooms, intricate coral-like structures and large brackets on trees. However, all of these manifestations are formed of the same basic fungal unit, the hypha (plural: hyphae). Hyphae are long tubular structures resembling garden hoses. They have rigid cell walls that may be reinforced by perforated cross-walls called septa (singular: septum). Hyphae perform a variety of functions in fungi. They contain the cytoplasm or cell sap, including the nuclei containing genetic material. Hyphae absorb nutrients from the environment and transport them to other parts of the thallus (fungus body). Finally, they may become bound together or modified to form more complex structures. The vast majority of fungi produce hyphae and only a much smaller number, the yeasts live without…”

When I’m looking for fungi, I’m looking “down” for tiny thingies most of the time, so I often miss the big stuff going on around me like a large five-point buck who stepped out from behind a fallen tree into view, and a mama deer with her floofy-looking fawn (all of his fur had been licked-up by his mom, so he was extra fuzzy all over). Glad I looked UP between mushrooms. Hah!

I also came across one spot where there were about 15 Turkey Vultures flying overhead. I don’t know if they were zeroing in on something dead, or if they were just “kettling” on the updraft there.

I walked for three hours and then headed back home.

Speaking of fungi, my fungi article was featured in the latest edition of “The Acorn”, the quarterly magazine published by the Effie Yeaw Nature Preserve. You can see it here.