I headed over to the Effie Yeaw Preserve for a walk around 7:15 am.  My friend and fellow naturalist, Roxanne, and fellow volunteer Trail Walker, Mary M. (“The Other Mary”) joined me in the parking lot.  Roxanne had just gotten a new macro lens for her camera and she was anxious to try it out, so a lot of our focus was on fungi and tiny things.

We were worried that our focus on the little stuff would bore The Other Mary; she likes taking pictures of the deer and turkeys.  So luckily we were able to see quite a deer, including some of the big 4-pointer bucks.  The rest of the time, she listened to us talk as we explained the different facets of lichen and took close ups of the fungi and slime molds.

As I mentioned, we got to see several of the big bucks in the preserve. At one point, two of them were standing together in close proximity, so we all tried to get a “two-fer” shot of them with our cameras.  As we were taking the pictures we each realized that the cameras wouldn’t focus on both bucks at the same time, so we had to take some shots with the buck in the foreground in focus, and some with the buck in the background in focus. Made for an interesting little lesson on depth and field of vision.

We also saw a few does with their fawns, including one mom that was grooming her fawn. Those moments always make for some sweet photographs.

We weren’t seeing a lot of large fungi, in fact hardly any, so we picked up fallen sticks and small logs and looked under and around them to look for the smaller stuff.  We found a lot of splitgill and Black Jelly Roll fungi that way, but also came across several tiny worms, white spidery-looking things (which I couldn’t identify, they were so small) and a couple of critters that were new to me: a tiny pinkish millipede, possibly Gosodesmus claremontus, and a House Pseudoscorpion, Chelifer cancroides, which is a kind of arachnid that looks like a scorpion in the front and a spider in the back.

Apparently, there are over 3000 species, so I’m not totally sure if I got the ID right, but I picked the most common one in California that lives under oak branches on the ground (and in houses, too, I guess).  The pseudoscorpion was almost the same color as the log, so we didn’t really see it until it started moving, and even then it was hard to keep track of it.  Using the macro attachment on my cellphone, I was able to get a few fairly good photos of it.

The Other Mary had to leave about halfway through the walk, so it was just Roxanne and me for the last hour or so.  We found another big buck sunning himself in the long grass and also found a small bachelor flock of male Wild Turkeys.  Among the small stuff, we found some jelly fungi, including Witches Butter on some False Turkey Tail, a couple different species of slime mold, and more little ghostly-looking pure white splitgill.

We walked for about 3 ½ hours and then headed out. I was surprised by how many people we saw out there walking today; I’ve never been out there when there were that many people without some kind of event going on.  Lots of parents with small children who were more interested in splashing in the mud puddles than anything else. On the one hand, I dislike crowds and all the noise and disruption they bring with them, but on the other hand, it was nice to see people getting outside into nature and taking advantage of the opportunities of fresh air and a little exercise on this first day of the new year.

I couldn’t get into the nature center to log my hours (because they were closed for the holiday), so I’ll try to remember to do that next week when I’m there. 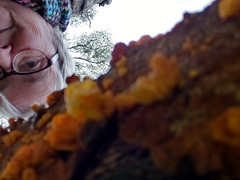 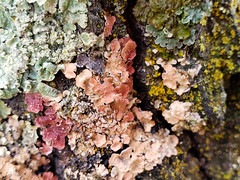 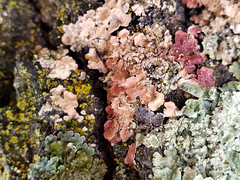 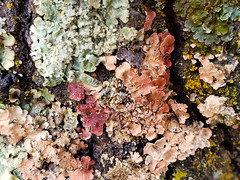