I got up around 5:30 this morning, got the dog pottied and fed, and then headed out to Auburn with my friend and fellow naturalist Roxanne Moger to look for newts. We’d been told by another one of my naturalist class graduates, Pam Hofsted, that California Newts had been found swimming and mating in the Shirland Canal by the China Bar Trail in the Auburn State Recreation Area, so we had to go see if we could find any.

It was about 46° at the Rec Area and rain was threatening but we thought the cooler weather and wet might make the newts more apt to come out.  It’s been too hot and too dry lately for them.

After a quick stop for coffee and a breakfast biscuit, we got to the Rec Area in about an hour and found the main gate.

According to their website: “…In the heart of the gold country, the Auburn State Recreation Area (Auburn SRA) covers 40-miles of the North and Middle Forks of the American river. Once teeming with thousands of gold miners, the area is now a natural area offering a wide variety of recreation opportunities to over 900,000 visitors a year… Black tailed deer and rabbits can be seen during the daylight hours, while raccoons, opossums, gray foxes and coyotes rule the night. Black bears, rattlesnakes, mountain lions and bobcats live in the park. The riparian habitat host California quail and canyon wrens. Red tailed hawks and bald eagles soar overhead, seeking their next meal… Auburn State Recreation Area Auburn Dam via Shirland Canal and Cardiac Bypass Trail is a 5 mile moderately trafficked loop trail that features a river and is rated as moderate. Dogs are also able to use this trail but must be kept on leash…”

We arrived there around 7:00 am but found that the main gate didn’t open until 8:00… but then were confused by the fact that there was a sign on the gate stating that there was supposed to a runners’ race there from 6:00 am until 9:00 am.  How could the runners get in if the gates were locked? Weird.

Right next to the gate was a small parking lot, a water fountain, payment kiosk (there’s a $10 fee for parking), and porta-potty. While I made use of the facility, Roxanne studied the lichen on the nearby boulders and paid the day-use fee.

Then we both did a little bit more lichen hunting and looking for galls on the nearby coyote brush (and found a few). We decided that since the gate was still closed, we’d try walking down to the trailhead we wanted, but after walking just a few yards, my body needed to get back to the porta-potty (Bad breakfast sandwich, I think. *sigh*), so I headed back there and told Roxanne to look for “cool stuff” while I was ocupado. TMI, I know.

While I was in the porta-potty, I could hear someone drive up, and heard Roxanne talking to whoever the driver was. It was one of the park maintenance crew, and he opened the gate for us.  Woot!  Once we got back into the car and started driving in, we were sooooo happy that the gate had been opened. The drive to the trailheads was downhill and relatively long.  If we had tried to walk it, I would have been exhausted by the trip down and probably not too able to make the walk back up to the parking lot. So, that was Nice Happenstance #1 today.

I had forgotten to bring the map with the trails on it, d’oh!, so we followed the maintenance truck – which led us down to the river, below the trailhead we were actually looking for. Along the way we spotted a few wildflowers making their debut including some Bush Monkeyflower, Filddlenecks and some sort of Paintbrush.  ((We’d seen a few Lupin along the highway on the way into Auburn, but nothing around the trails.)) We took a few photos and headed back up the road, turning in to the little parking lot where the Cardiac Bypass Trail was.  Yes, that’s really its name. Hah!

There was a woman (with her two UNLEASHED dogs) setting up a table for the runners there, and we did eventually see maybe 20 of the runners as they passed through. While we were there we checked out the lichen on the trees, and found what we thought might have been some kind of dodder (red-orange thread stuff) on an old Cottonwood Tree.

There was also a lot of Buckbrush in bloom there, and the pine trees were all doing their “male thing” sending out pollen all over everything.

We were also a little surprised to see rust fungus, similar to what we found elsewhere on Coyote Brush, emerging from galls on some of the pines.  We’re assuming it’s from the same genus but a different species.

After a short while, we looked down the cliffside at the trail and figured it wasn’t one I’d be able to navigate at all – and it didn’t show any signs of hooking up with the canal anywhere, so we decided to nix that and go looking again for the China Bar trailhead. As we were loitering around, though, we met an older gentleman named Richard who was also deciding against taking the Cardiac Bypass Trail.  He said he knew where the canal was and offered to lead us there with his car.  So nice!  So, we followed him over to that trailhead and thanked him profusely for his help. That was Nice Happenstance #2.

The Shirland Canal was right off a little parking lot and we were finally able to start walking the trail there.  We came across another gentleman who was walking his elderly dog back to his car, and he asked us if we were looking for the newts. We told him, yes, and he said, “They’re here! I saw some balls of them.  Look for them in the more still shallow parts of the canal.” That was Nice Happenstance #3.

As we walked along, I was so focused on the water in the canal to my right that I’m sure I missed a lot of stuff along the left-hand side of the trail. I DID note the Golden Dwarf Mistletoe, Western Buttercups, a few Blue Dicks, and Turkey Tail Fungus, though.

The canal didn’t disappoint, and Roxanne and I counted 10 newts, some of them single, some in pairs, and some in en masse in a mating ball of four.  Because they were in the water it was hard to get any close-ups of their faces, but I was still pretty satisfied with the photos and video clips I was able to get.

Rant: I WASN’T pleased when someone let their UNLEASHED dog jump into the canal, lay down and splash around in there right next to where the newts were. Unleashed dogs in wildlife areas is a pet peeve of mine – and I was especially upset by the fact that the humans made no effort whatsoever to clean up after their pets on the trail even though the Rec Area provided free doggie-dooley bags at the head of each trail.  There was dog crap EVERYWHERE. Guh!

Anyway, we walked the trail until we came to a “slide” area where the canal started its downhill tilt.  I felt it was unsafe (for me), and figured the water would be running too fast for the newts to be settling in, so we turned around and headed back to the car.  Nice Happenstance #4 was that throughout our excursion the rain had held itself off, and didn’t start until just before we got back to the parking lot.

I figured we walked about 4 hours all together, but I still felt pretty good and energized because of the adrenaline rush I got from seeing the newts. 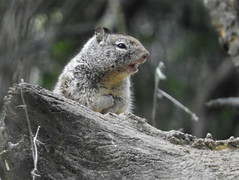 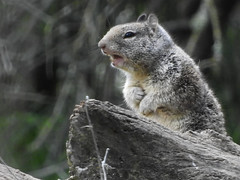 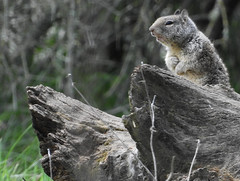 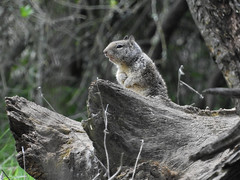