I got up around 5:45 this morning and headed out to the Effie Yeaw Nature Preserve for my weekly volunteer trail walking gig.  It was clear and about 41° at the river, but warmed up to about 60° by the time we left.

I wanted to get there around 7:00 – forgetting that with the Stupid Time Change it would still be DARK when I got there.  My friend Roxanne and “The Other Mary” (Mary Messenger) showed up, too, and we all had to laugh about standing around in the dark until the sun came up.  What was cool, though, was the fact that the Worm Moon was still up, so we were able to get photos of that…and we could hear a Great Horned Owl hooting in a nearby tree (but it was too dark to see it).

Once the sun came up a bit, we started walking in earnest and came across deer and turkeys right away.  Several of the turkeys were up in the trees, and we were able to get some silhouette shots of them with the few morning clouds painted by the rising sun behind them.

Later, Roxanne and I came across a small flock of the males following after a small flock of females.  (By that time The Other Mary had left; she’s still dealing with sciatica and couldn’t walk without pain anymore.) One of the female turkeys settled down in the grass, but presented her SIDE, not her back, to the males.  For a moment, I thought maybe she was injured or something, but no.  She eventually got up again and walked away when the males converged on her.  Wutta tease!

Because it’s breeding season, all of the tom are looking fabulous in their iridescent copper and gold feathers and brightly colored faces.  We also saw a leucitic tom among them.  (Leucism is a condition in which there is partial loss of pigmentation in an animal—which causes white, pale, or patchy coloration of the skin, hair, feathers, scales or cuticle, but not the eyes.)  He had white edges on many of his feathers and a bright white bar across one wing.  I don’t know if that odd coloring if off-putting to the females, but the males kept trying to run him off so they must’ve considered him “competition”.

Mama Red-Shouldered Hawk was up in her nest, and we saw several other hawks, including a Red-Tail along the trail.  One of the Red-Shouldered Hawks flew right down in front of us and landed on a tree stump, where it posed for a while.  The lighting kind of sucked, but we were still able to get some photos of him.

There were quite a few deer out today, mostly does and their yearlings, but we also found a small bachelor group of bucks, all of whom had just recently lost their antlers.  We could still see the swollen pedicles on the top of their heads.  We did come across one buck, though, who was still hanging onto his rack, an impressive 4-pointer.

We’re also starting to see the birds “fight” for nesting spots and doing some of their early courtship behavior. We spotted an Acorn Woodpecker checking out a nesting cavity in one of their granary trees. He got inside of it for a bit, but then came out to chase off some European Starlings and Tree Swallows who were also looking at the tree.  Starlings and Tree Swallows can’t excavate their own cavities, so they depend on the woodpeckers to do that for them.

We watched one female Starling doing her courtship thing where she acted like a baby bird, flapping her wings and peeping loudly, to try to get the males to bring her something. I got a little video snippet of that behavior. It’s kind of funny because the females are SO LOUD when they’re doing that.

Among the other birds we saw today were Oak Titmice, Bewick’s and House Wrens, Bushtits, some Western Bluebirds and Turkey Vultures, among others.  We also got to see some Cottontail rabbits and a Jackrabbit along the trail.

Except for the invasive Periwnkle, there aren’t a lot of wildflowers blooming at the preserve yet. (The weird weather has them sooooo confused.) But we did find a couple of Blue Dicks and some Fringepod along the trail.  The warm weather made the Pipevine Swallowtail butterflies emerge a little earlier than usual and now they’re having trouble finding nectar to drink…

I was happy, though, to see the bees in the “Bee Tree” again.  I thought they’d left, but now I think they were just hibernating.  Waiting for it to warm up again and for the flowers to start budding.  All of the oak trees in the preserve have their pollen-bearing catkins out right now, so the bees have something to collect until the flowers bloom.

We’re not seeing the galls of the Live Oak gall wasps yet, though, and that’s a little troubling.  We’re seeing a LOT of Two-Horned galls, though, which is unusual at the preserve.

At one tree, Roxanne and I stopped for several minutes and got loads of photos of the different lichen on it. We also saw tiny bundles of dried Witch’s Butter (jelly fungus)in among the lichen, and that was kind of surprising to see considering how dry it’s been lately.  I thought the jellies would be long-gone by now.

Roxanne and I actually walked for about FIVE HOURS (!); it was noon when we left the preserve.  I was really astonished that I’d lasted that long.  I think I was buoyed up by adrenaline; we kept finding one interesting thing after another to photograph. 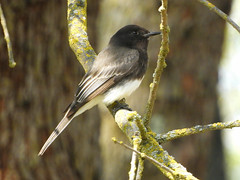 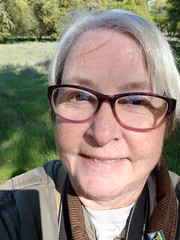 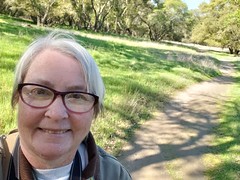