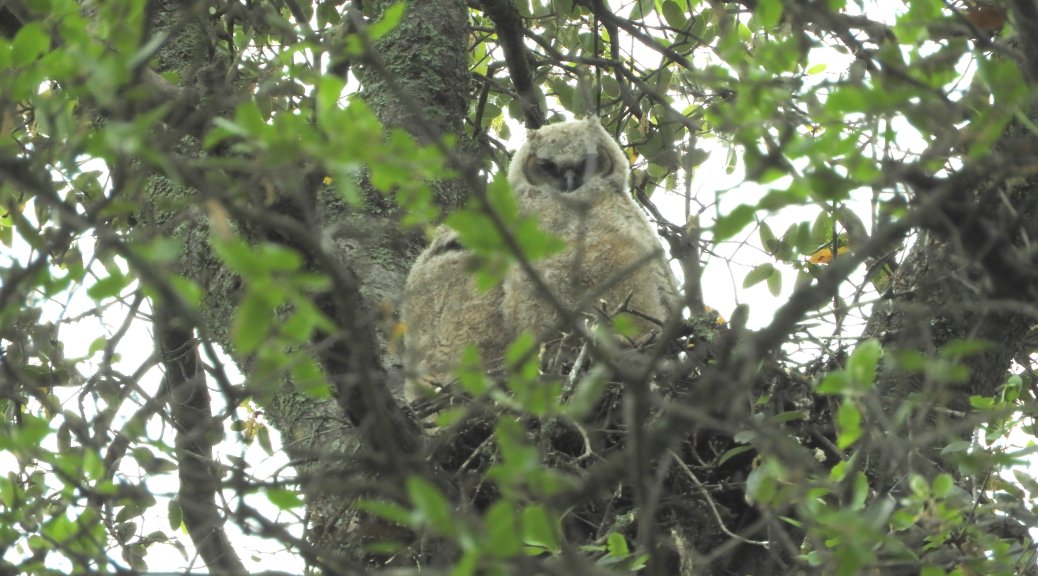 I got up around 6:30 this morning to overcast skies, and headed out to the American River Bend Park to check on the nest of Great Horned Owls there  — and get some fresh air and low-impact exercise.

This is the season for Craneflies (Mosquito Hawks); they’re everywhere… but are very uncooperative  And I also came across a few Snakeflies and different kinds of caterpillars including 3rd or 4th instar Tussock Moth, Dagger Moth and Oak Leafroller Moth  caterpillars.

I also found a few female Pipevine Swallowtail butterflies that were looking pretty beat up, their wings all ragged from the weather and razor-like grasses in the fields.  They’re laying their eggs on the pipevine plants right now, and I was able to find quite a few clusters of them on the stems, leaves and seedpods of the plants.

When I was looking over sticks for specimens of lichen, I caught sight of a Globular Spirngtail with the macro lens of my cellphone.  They’re super-tiny and hard to see even with magnification, but I was able to get a few shots of it.

Among the other insects, I found three different species of aphids including a Woolly Oak Aphid, Mugwort Aphid and Black Bean Aphid.  I used the macro lens on the Mugwort Aphid and was able to see its black appendages and red eyes.  Freaky!

I went to where the Great Horned Owl’s nest to see how they’re doing.  The two fluffy owlets were in the nest, but mom was in a tree opposite them, preening.  At one point, she lifted on of her feet and stretched her leg.  Man, her feet are BIG.

While I was watching her, one of the homeless guys that “lives” at the park tried to approach me to talk about the owls.  I told him he needed to stay away from me, I was “social distancing”.  He said he had been taking videos of the owls while he’s sitting there, and said he could email them to me.  I told him I don’t give my email address to strangers; sorry.   He tried to come over to me to give me HIS email address, and again I told him no… social distancing. He then picked up a big piece of paper from his vehicle and wrote his email address on it and held it up so I could take a photo of it.  Hah!  Persistent and ingenious. So, I took a photo of it and thanked him.

When I was walking along the trail nearest the river, I could hear California Quails chi-ca-going at each other.  I tried to follow the sound, and caught sight of one of the males down among the shrubs and rocks on the shoreline. He was pretty far away, so the photos aren’t the best, but I was satisfied with them anyway.

I also saw quite a few House Wrens, Scrub Jays and Acorn Woodpeckers along the way.

I saw several bucks who have lost last year’s antlers and are starting to grow their new ones. One had about 2 inches of growth already, but the others just had “nubbies”. There was also a doe further up the trail sort of hiding in the thicket, but she stepped out long enough for me to get some photos of her before she bounced off through the forest.

I was walking for about 4 hours and then headed back home.