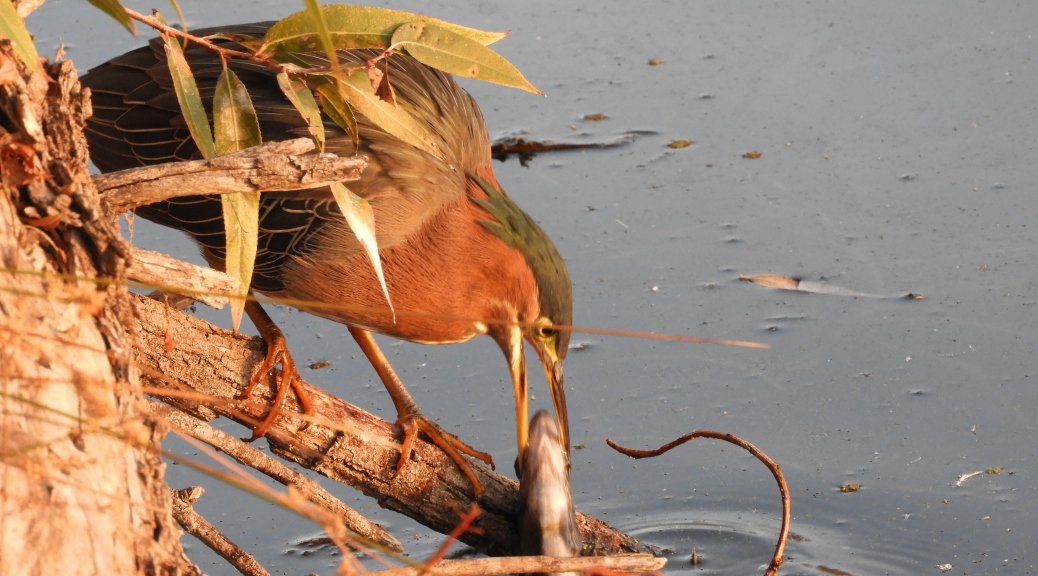 I got up around 6:00 this morning, and was out the door by 6:30 to go out to the Mather Lake Regional Park for a walk with my friend Roxanne. It was about 37° when we got to the lake, clear and “crisp”. It was a super-fun, super busy wildlife day. There were actually times when we were telling Mother Nature, “Wait a minute, I want to get photos of this before you show me that!” Hah!

As we were stalking a Great Egret on the side of the lake, we noticed movement on the water beside us. Inside a little hidey-hole we saw a muskrat eating his breakfast. Right near him was a Green Heron trying to eat a “huge” fish. And then a Black Phoebe flew in…

The whole morning was like that — so much life everywhere.

We could see Belted King Fishers flying and face-planting in the water after fish. They move sooooo fast! One of them parked itself on the telephone wire over where the muskrat and friends were found, and I was able to get a so-so photo of it.

I came across the cottonwood tree that was further “excavated” by a beaver (we could see the teeth-marks in the wood), and was surprised to see it blooming with clusters of oyster mushrooms, some black ants, and outcroppings of that Cytospora Canker I just learned to identify yesterday!

I really think that given another week or so, that beaver will have that tree felled and in the water. I also think we spotted the beaver den today, too.

On the lake was the lone Tundra Swan among the Mute Swans, Roxanne found a Fox Sparrow, and I found a Western Bluebird that looked almost sooty-dark.

There were LOADS of Double-Crested Cormorants in the water and in the trees along the edge, grayish juveniles and dark adults. In the water, we also saw a few Buffleheads (!). Then we were surprised by the appearance of a single otter. She poked her head up a few times before swimming off.

There was just so much to see today. I was VERY pleased with the visit.

At one point, while we were heading back to the car, we came across a spot where tree roots were clogging up the trail and I didn’t think I could walk over them. So, I opted instead to walk along the edge of the trail under the branches of a willow tree. As I was ducking under them and moving along, a blackberry vine got wrapped up around my shoe, tripping me, and I fell forward against the tree. Now, for me, that’s “near fatal” because once I’m down, I can’t get back up onto my feet by myself (a combination of muscle weakness and pain in my left hip caused by arthritis and a pinched nerve). Luckily, Rox was with me. She stepped in behind me and lifted me upon to my feet while I used the narrow tree trunk like a handicapped bar to pull myself up. Between the two of us, we got me back up onto my feet. The fall tweaked out my hip joint a bit, but I was still able to walk the rest of the way back to the car. Phew! Thanks, again, Rox for being there and being such a good friend!

We took the scenic route back home, following Zinfandel down toward the vernal pool area where the road is no longer paved all the way to where it intersected with Jackson and other recognizable roads…