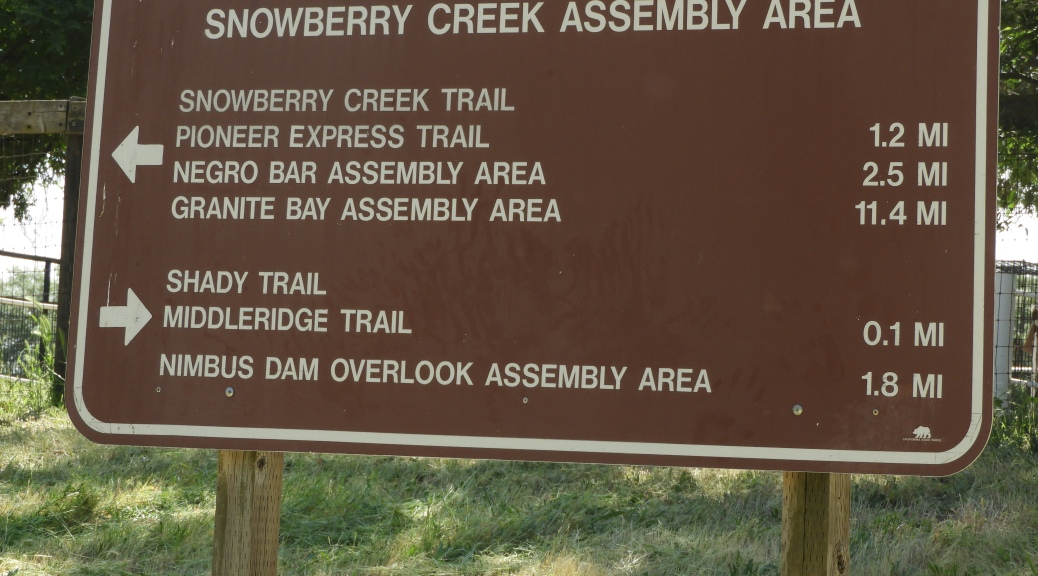 According to the folks who have been watching the nest every day, the owlet we were able to see today, who was sitting high in its tree, was the youngest of the three siblings and so the last to fledge. It seemed to me that it was too soon for the other babies to be fully fledged, so I took what was said with a grain of salt.

I didn’t see mama owl anywhere; we guessed she was out trying to find the last baby something to eat. I found a dead lizard under the tree, which I’m presuming was a tidbit mama brought for her baby — that was either rejected, or fell out of the nest.

I also found the Black Phoebe’s new nest; it was on the opposite side of the ranger kiosk from last year’s nest. Hah! I saw one of the parents fly in, feed the kids and fly out again. Woosh!

Then I was off to the Mississippi Bar. The bar is a part of the Folsom Lake State Recreation Area, covers about 11,500 acres, and provides access to the American River, part of Lake Natoma, several trails, open plains and oak woodlands.

In the past, the area was dredged for gravel, gold and silver, so the landscape is pretty scarred and wild in most places. I pulled off to park in the Snowberry Creek Assembly Area adjacent to the Shadow Glen Family Stables.  I had never been there before, so I just basically flipped a coin in my brain as to which direction to go and what trail to start with.  I chose the Shady/Middleridge Trail, and will go back and do the Snowberry Creek Trail at another time.

The Shady/Middleridge Trail cuts across a broad flat plain with some small plateaus in it, and abuts a riparian strip along one side. I was investigating a lot as I went along, so I didn’t get along as far as I might have. I didn’t get as far as the water, for example; maybe next time.

I perused the riparian strip for the most part. Although I heard a lot of birds, I only caught glimpses of most of them: Acorn Woodpeckers, mockingbirds, wrens, Tree Swallows, Turkey Vultures, and a Phainopepla.

On the pipevine plants, I found some of Pipevine Swallowtail Butterfly caterpillars in their early instars.  I also found a Tussock Moth caterpillar, a Sulphur Tubic Moth, and the brown inchworm caterpillar of a kind of Geometrid Moth. Those little guys try to make themselves look like twigs when disturbed, so this one straightened out stiff when I touched its leaf.

There were also quite a few spring galls on the trees including the big “oak apples”, stem galls, bud galls, some old Flat-Top Honeydew galls, and a few others.

The weather was lovely, breezy and around 51°. I walked for about three hours before heading home. This was hike #36 of my #52HikeChallenge.