I got up around 6:00 this morning so I could head out to Lake Solano Park in Winters, CA. This was a recon for the trip we’ll be doing with the whole class on Saturday, and I wanted to check out where plants were growing, if the ferns were out yet, what birds were out there, etc. It was very windy and chilly around 44° when I got there and about 53° when I left.

At the park, I was joined by my coworker Nate L., some of my naturalist class students, Sharyn L. and Mary S., and two of my naturalist class graduates Elaine and Roxanne.  Sharyn had forgotten her cell phone and was double bummed when she realized the battery in her camera was dead, so she had no way of taking photos. Not having the technology in her hands, though, she said helped her to focus more on what she was hearing rather than what she was seeing, so the experience was a lot different than she thought it might be.

I was hoping to see some pipevine, manroot and Giant Horsetail, and thankfully they were all present. Those are always great things to show to the students. We also saw over 30 different plant and animal species, including the resident Western Screech Owl, and found a couple of animal skulls. We think one was a coyote skull, and the other (with a fully disarticulated skeleton) was some kind of domesticate dog, based on their teeth.  It’s always great to go out with a group on excursions like this because everyone sees something different, and as a group we’re alerted to more things.

We walked for about 3 ½ hours, and then each went on our way. 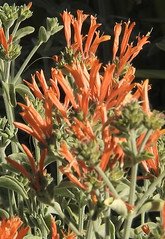 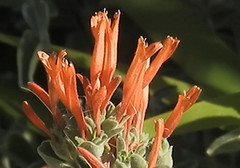 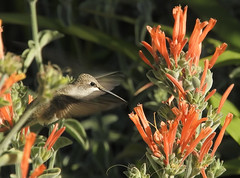