I got up at 4:00 this morning, got the dog fed and outside to pee, and then headed out to Woodland for our first field trip for the summer naturalist class.  I got to the Woodland Library around 5:45 am and waited for my coworker Bill and the students arrive. The weather was VERY cooperative today. I was worried that the summer heat would make our field trips unbearable in the summer, but today it was nice.  It was in the low 60’s when we headed out, and only about 78° when we came back, so that was great.  There was also a slight breeze which helped, too.

When everyone got to the library and had signed in, we all headed out to the Sacramento National Wildlife Refuge.  I left my car in the parking lot and went with Bill in his van along with our student, Jeanette, who is a middle school teacher.

While we were walking around the nature center, I think they all got the majority of those requirements!  The insects were probably the most difficult for everyone, but we’ll see on Friday (at class) how well everyone did.

Near the nature center, we came across a large fat weevil sitting on the top of the flowering head of a tule.  Bill rapped on the weevil a couple of times and figured it was dead, but when I stroked it, its feet moved, so we all inferred that the weevil was in a state of torpor, waiting for the sun to get a little higher in the sky so it could warm up more and start moving around.

Everyone took photos of it and tried to identify it using the iNaturalist app we’d told them about in class on Friday.  It came up as a Billbug Weevil from the genus Sphenophorus. If you look at the map in iNaturalist, though, you’ll see that Billbug Weevils have been sighted all over the globe. So, calling this a Billbug Weevil is somewhat accurate, but for a more precise ID, I wanted the students to try get down to the species level on the weevil when they got home. Insects can be especially hard to ID because there are literally millions of them, and you have to deal with taxon levels that include superfamilies, tribes and subtribes before you can get close to the species. It will be interesting to see how far the students are able to get.

We also found a buckwheat plant that I didn’t recognize as buckwheat at all because its shape wasn’t like any buckwheat plant I’d seen before.  The signage by the plant said it was California Buckwheat, Eriogonum fasciculatum, as did iNaturalist, but that didn’t quite look right to me. The leaves were the wrong shape.  So, I did a little more research, and I believe it was actually St. Catherine’s Lace, Eriogonum giganteum, a kind of wild buckwheat that usually only grows in Southern California. When we were studying the plant, two of the students (Jeanette and Edna) also observed that some of the flowers still had their pink pollen balls and others did not… and we inferred that those that didn’t have their pollen balls anymore had already been pollinated.

When it came time to drive the auto-tour route, I drove Bill’s van so he could do more observations, and Jeanette and another student, Mica, a retired farmer, came along with us. Bill was able to open up both sides of his van, so the gals could get an unobstructed view of what was out on the preserve. Although everyone was able to go at their own pace along the route, we stopped at two of the park-and-stretch areas so we could compare notes and get a closer look at things.  At the first stop, the students Ken and Alison, who are already expert birders, were helping the students spot and identify bird species and also explained what they meant when they talked about the birds’ GISS.

GISS stands for “General Impression, Shape, and Size” (originally a military term). Birders often use the bird’s GISS as a way to do a preliminary or in-field identification of a bird when it’s backlit (only seen in silhouette) or is too far away to see any details of its coloring. So, Alison and Kent were able to distinguish a pair of Northern Harriers flying over our heads from the Red-Tailed Hawk that was flying near them by nothing but their GISS. Very cool.  I’m nowhere near being that kind of an expert.

At the second park-and-stretch spot, students relaxed with their lunches for a little while, and I was able to find a couple of examples of a specific kind of gall to tell them about, a Cottonwood Petiole Gall and is created by the aphid, Pemphigus populitransversus. The wingless female aphid called a “stem mother” chews at the leaf petiole (the stalk that joins a leaf to a stem) until it swells and then she climbs inside the swelling and has her babies inside of it. The baby aphids are born live and can be in either a winged form (called an “alate”) or without wings.

While the students were resting and checking up on their notes, one of them, Alison, let us see what she’d put into her field journal for the morning. She’s an artist, and she uses fountain pens and watercolors to write and decorate her entries. It was beautiful. I can hardly wait for Friday when all the students share their journals, so I can take photos and let you see what they’re doing…

I also overheard a couple of students talking about how much they enjoyed the class, how much they’ve learned already (in just two sessions) and how many resources we’ve introduced them to that they didn’t even know existed before now.  That is so gratifying!

One more learning moment: On the eucalyptus trees along the end auto-tour route on Saturday, I also stopped to pull a leaf off of an obliging eucalyptus tree, so I could show the students in our vehicle the white teepee-like formation on it that some folks mistake for galls.  The formations are actually called “lerps” and they’re created by a tiny insect called the Red Gum Lerp Psyllid, Glycaspis brimblecombei. These insects spin little white houses for themselves made of sugars and wax pulled from the leaves. They’re often very sticky with the honeydew produced by the insects.

When we were done with the tour, everyone went their separate ways.

Up at 5:00 am with the dog, and we headed out to the Sacramento National Wildlife Refuge. I wanted to beat the heat, but I also wanted to test out the car on a long drive before heading back to work on Monday.

At the refuge, I was hoping to see a lot of dragonflies… but without the large pond, they just weren’t around. It was kind of disappointing. The whole place is dry, with just small “mud holes” here and there. The big surprise was a Bald Eagle that took off just as I stopped to try to get photos of it. And I got a few cute photos of a mama California Ground Squirrel sitting up on a stump and eating a thistle head. I just love those little critters.

Because there wasn’t a lot to see, I got through the whole auto tour route very quickly and headed back to Sacramento. I got back home around noon. I think that’s the fastest turn-around I’ve ever done there.

On my way home from work, since I had to detour past it anyway, I stopped at the WPA Rock Garden by the zoo for a little while. The hot humid air was difficult for me to breathe, so I was only there for about an hour.  I was hoping that the Jumping Wasp Galls might have broken open and fallen to the ground there, but no. The gutters were filled with other leaves the big oak there had dropped already.  Those days when it was over 100º were just too much for it…

There wasn’t a lot to see at the garden but I did get photos of some of the summer-resistant flowers, and lots of bees, Skippers, and a few other butterflies including a Common Buckeye and Gray Hairstreak.  There were also a couple of large, very pregnant, praying mantises: one tan and one green.  Both of them were hanging around in spots where there was a lot of overlap in plants, and near to spots were the bees and Skippers were having lunch, so they could grab a meal for themselves if they wanted to.  Despite their size, they’re able to camouflage themselves well blending in with the dried or fresh leaves of the plant (depending on what color they are).  The tan one unfurled her wings at me when I got a hold of her; they’re always so neat looking when they do that… 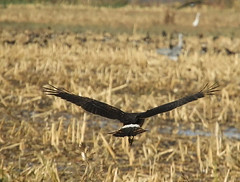