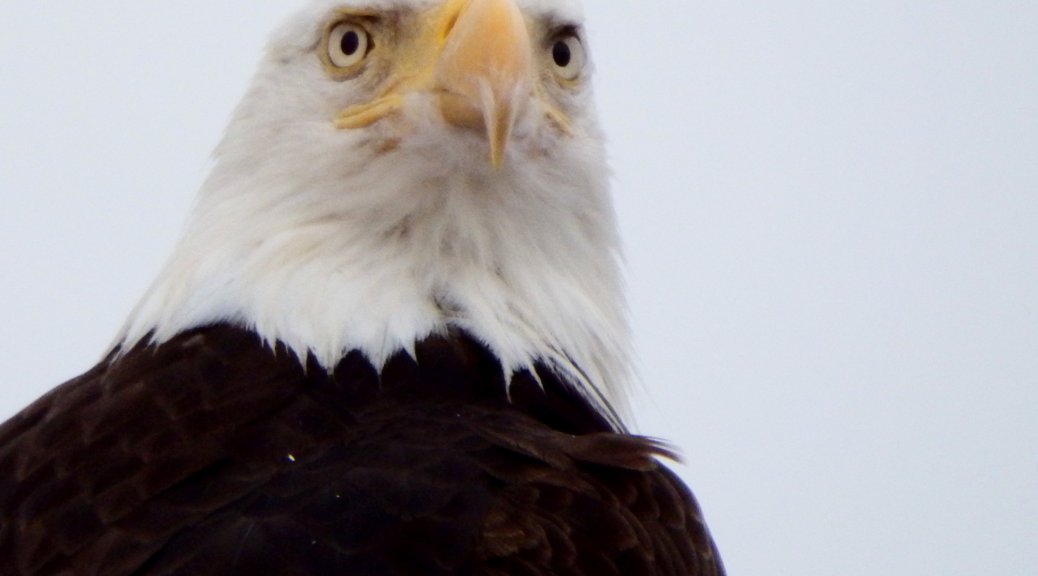 The dog woke me up a little bit before 5:00 am, and once I’m up it’s almost impossible for me to go back to sleep, so… I just stayed up and then headed out to the Sacramento National Wildlife Refuge.  It got up to about 80º today, but was overcast all day as well. Weird.  I like the overcast though; it makes outdoor picture-taking a lot easier. You don’t have to fight against glare and harsh shadows.  It also confuses the wildlife a little bit (they think it’s earlier in the morning than it really is, so they’re active a little while longer than they normally would be.)

The drive to the place was uneventful, and I got there a little before 7:00 am.  When I stopped at the first park-and-stretch area, I was taking some video of a little Marsh Wren at its nest and could hear the woop-woop-woop calls of Pied-Billed Grebe and the deep cello-call of bullfrogs all around me.  For a long time, I was the only person on the trail, so it was just me and critters…

There  were lots of jackrabbits and cottontail rabbits everywhere. At one point along the auto-tour there were about 10 of them running helter-skelter all over the road and into-and-out-of the tall grass.  I got a video snippet of some their antics.  It just made me smile to watch them having so much fun… I came across one little Cottontail that had both of ears “cropped”; the tips were totally gone.  I’ve seen some rabbits with one damaged area, but never one with two.  It looked like something had bitten them off… and in another spot, at the park-and-stretch area near the viewing platform, I found a Cottontail who didn’t seem too concerned about my walking around it. It even stretched out on the gravel to warm its belly.  (Well, it WAS the park-and-stretch area afterall. Hah!)

I saw a lot of otters on the road ahead of me, but didn’t get any close-ups of any of them (they move so fast!) And one spot, it looked to me like the otter was rolling in either otter poop or raccoon poop.  To each his own…

One of the big surprises of the morning, though, was coming across a Bald Eagle.  They’re somewhat common at the preserve in the winter, but by the summer they’re usually all a little further north or up in the mountains.  When I first saw it (at a distance) I thought it was just a Turkey Vulture; all I could see were its dark back and shoulders.  But then as I got closer to it, it raised its white head and I could tell it was an eagle.  I took dome distances shots of it, and then moved the car up closer, inch by inch, hoping it wouldn’t fly off before I could get some decent photos of it.  I was lucky.  It sat right where it was for several minutes and let me a bunch of pictures before it got bored with me and flew off.  Later, as I continuing down the auto tour route, a women drover he car up next to mine and said she had spotted the eagle on the little island the cormorants and Pelicans often rest on and was heading up to take pictures of it.  I told her it had already posed for me, but I’d go check out the island, too, when I got closer to it.  The woman drove past me and hurried up the road… but she didn’t stop for very long once she reached the spot she wanted, so I assumed that she didn’t get the photos she was hoping to.

I had stopped my car where I was because I was trying to get photos of some juvenile Widow Skimmer and blue Pondhawk dragonflies that were flying among the weeds and tules along the shore of the permanent wetland pond.  It’s a tiny bit early in the season for them. Over the few months there should be tons of dragonflies and damselflies out there… Among the other insects, I also saw some Yellow-Faced Bumblebees, lots and lots of Painted Lady and West Coast Lady butterflies, Pipevine Swallowtail butterflies, Common Buckeyes, Cabbage Whites, some Sulphur butterflies, White-Lined Sphinx Moths and a tiny Crescent butterfly.  Among a crop of phacelia, I also found a large group of what I think were Salt Mars Caterpillars (which grow into large white moths with black speckles on the wings). It’s so hard to tell, though.  I haven’t found a really good book on caterpillars yet; they are so many species…

By the time I got to the spot where you can see the “Pelican island” it was totally vacant; not a single bird on it.  And that VERY unusual. There are normally lots of birds gathered on it… But if the Bald Eagle had flown over it or actually landed on it (as the woman who’d driven past me had suggested), then I wasn’t entirely surprised by the vacancy.  Most of the birds in the refuge will duck-and-cover if a hawks flies over.  But when the eagles show up, everything scatters…

My other big surprise of the day was when I found a Muskrat swimming in the water, munching on water vegetation.  It was pushing its way into some tules, and in doing so dislodged a small garter snake that had been sunning itself there. The snake fell into the water right in front of the muskrat.  The muskrat startled, but didn’t stop eating and the snake swam away.  It was the second of two snakes I saw today.  Like the otters, though, the snakes move so fast it’s hard for me to get any pictures of them…

It took me about 5 hours to do the 6 mile loop, and then I didn’t get home until around 1:30 pm… During the last hour or so of my drive I could feel my throat getting really and scratchy, and by the time I got the house, I knew cold was coming on.  Dang it! 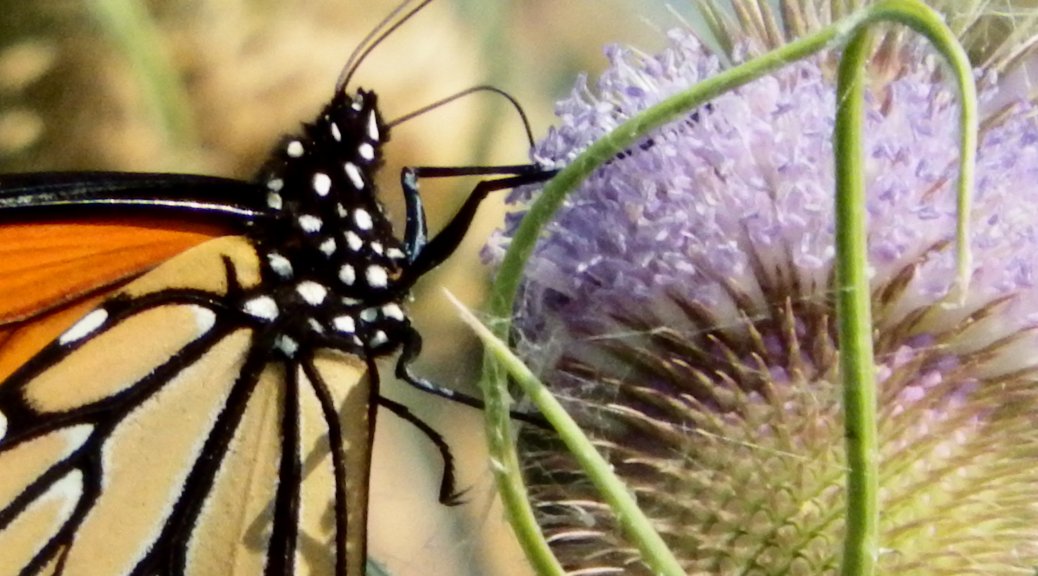 Even though it’s my day off, I wanted to beat the heat as much as possible and got up around 5:00 am to head off to the Sacramento National Wildlife Refuge.  I had to stop twice on the way: once to put gas in the car, and once to stop at a rest stop and unload my morning coffee.  Hah!

The first thing I saw when I drove into the refuge was a Great Blue Heron poking its head up over the tules to watch my car drive in.  Then for the most part it was all the usual suspects like jackrabbits and Cottontails, thousands (literally) of Variegated Meadowhawk dragonflies – so many, in fact, that I got bored taking photos of them — and another en masse explosion of blue damselflies, some California Ground Squirrels, Coots, cormorants, Pelicans, Pied-Billed Grebes (their songs were coming from everywhere), seagulls and other birds. I also saw skippers, Monarch Butterflies, Crescent, Buckeye, Painted Lady and West Coast Lady butterflies, and Cabbage White butterflies among the other bugs.

Oh, and I did see my first juvenile Coot today.  The Coots are always all over the place, but I’ve never seen a baby one – and this was the first time I’ve seen a juvenile, so they must guard their babies really well!

The orb-weaver spiders had created webs that covered whole areas between the tules, like a sticky obstacle course.  In one spot, I was trying to get a photo of an American White Pelican on the water, and the camera couldn’t “see” past the giant spiders in their webs in front of it… So I got a nice of photo of a spider with a totally blurry pelican behind it.  Hah!  The spiders had actually managed to capture quite a few dragonflies; the carnage was everywhere. One spider actually managed to parachute over to the car and drop down inside through the open window.  Yikes!  I don’t usually mind spiders, but that sucker was HUGE!  And I don’t know where he ended up…  Eew.

On some of the teasel, I saw what looked like white “globs” on the flowering heads.  I couldn’t tell what they were (you can’t leave your vehicle to investigate things on the auto-tour) but I took photos of them anyway.  When I got home, I processed the photos and realized the globs were actually pure white Crab Spiders.  They seemed so shockingly bright and obvious to my eye when I saw them – but then I remembered that these spiders give off an ultraviolet signature that generally masks them from their prey (which can see into that part of the spectrum).  Cool.

We’re just starting to see the exuvia from the larger dragonflies now clinging to the tules near the water.  There should be a lot of big darners out in another week or so, I’d imagine.

There were a few unexpected surprises along the auto-tour route: (1) a large muskrat made to swim-by’s alongside my car in the permanent wetlands area.  I got videos of his going in both directions.  The first time around, he was swimming and chewing on something at the same time.  The next time I saw him he was absolutely covered in eel grass and other vegetation; I had to laugh, he looked so funny.  I wonder if it was building a “nest” somewhere.

(2) I also got some video of a pair of Clark’s Grebes in the water.  The video sucks eggs (because the subjects were soooo far away, and the camera had to try to focus through heat waves coming up from the ground), but if you look closely, you’ll see first one and then two little white fuzzy black-beaked babies on mama Grebe’s back! They’re soooo cute!

And surprise number (3) was when a river otter ran past the road in front of the car – followed by its baby!  I’d never seen a baby otter before.  They moved to fast, though, I couldn’t get pictures of either one of them.  Rats!

Oh, at one point, I could see some male mule deer off in the distance – all in their velvet – and was totally shocked when one of them stood up among them and I could see his rack of antlers.  I swear those antlers were as long as his legs were!  I’d never seen ones sitting up so tall on a deer’s head.  I got some photos (but they were all shitty because the deer were so far away); I’ll try to post one to the photo album anyway so you can see it.

CLICK HERE to see an album of more photos.

I only made one pass through the refuge – because by noon it was already in the 90’s out there, and I didn’t think I’d see much of anything else in the heat.  I headed home and got there without incident.  I crashed with the dogs for a little while and then watched some TV and went through all of my photos 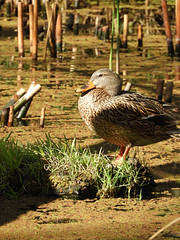 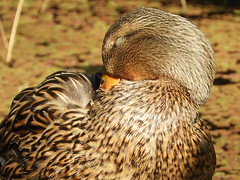 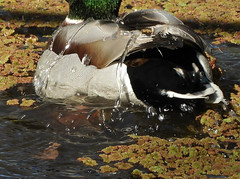 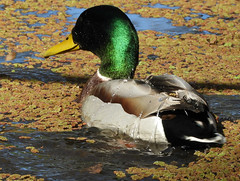