I got up around 5:30 and was out the door by about 6:15 am to go to the Effie Yeaw Nature Preserve for my regular Tuesday trail-walking gig. The weather was beautiful: about 53° when I got to the preserve and about 70° when I left. Sunny and a little bit windy.

I saw LOTS of birds’ nests: European Starlings bringing some twigs for the nesting cavity and some bugs and worms for the hatchlings. (I could hear the babies squawking inside the tree); Phoebes bringing bugs for their babies; an Oak Titmouse carrying fecal sacs out of her nest; a male House Wren showing a nesting cavity to a female, even going to far as to get into the cavity himself, stick his head out and sing to her. Hah!

Saw lots of squirrels, especially young Fox Squirrels who were running around, jumping, and putting just about everything they could into their mouths.  Generally, acting “squirrely”. Hah!

I found some caterpillars I’d never noticed before on the Redbud trees. They were pale green and had folded themselves inside the soft leaves of the tree.  You’ll never guess what they’re called…  Redbud Leaf-folder Moth caterpillars. Sometimes the names are like, “Duh!”, obvious.

I also found caterpillars on the leaves of the blackberry bushes, and these guys were tricky. They had an escape hatch, so if I touched the front of their silk “nest”, they would zip out the back and fall onto the leaf below them. Some of them had black faces and some of them had reddish-tan faces. I haven’t really ID-ed them yet.

And, of course, there were Tussock Moth caterpillars everywhere.  Here’s a video snippet of an active guy on the top of one of the water stanchions at the preserve: https://youtu.be/Bj9nZiy_EmI

I think I’d mentioned before about the fact that I was finding tiny dirt-clod turrets on the trail.  They look like “hoodoos”; y’know like the big stone ones at Bryce Canyon, but on a tiny-tiny scale.  I couldn’t figure out what was making them, so I put my naturalist students on the hunt for information. Naturalist graduate Deborah Dash sent me some photos of the Diadasia bees and the turrets they make, but all of the photos were from the top of the turrets not the side, so I couldn’t really compare them to the photos I had.  But, that tip led me to look up other Diadasia bees, and I think I found the right one.  I now believe these are the turrets of the “aggregate nests” of the solitary, native Mallow-Loving Digger Bee, Diadasia sp., subgenus Coquillettapis, This website shows how the turrets are created. So neat! (http://nathistoc.bio.uci.edu/hymenopt/Diadasia%20Coquillettapis.htm)

Near the end of my walk, I couldn’t understand why I was so frigging tired. Then I looked at the time and realized I’d been walking for FIVE HOURS!  Yikes!  I get so wrapped up in what I’m seeing on the trail that I lose track of time. 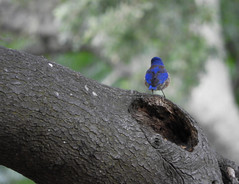