Certified California Naturalist, Roxanne Moger and I went out to the Sacramento National Wildlife Refuge around 6:00 am this morning. The weather was beautiful today, but there wasn’t a lot to see at the preserve. We’re kind of in between seasons, so the large flocks of birds have all left, but the insects (like dragonflies, damselflies, and orb-weaver spiders) haven’t arrived yet. We did see swarms of Painted Lady butterflies and some Cabbage White, but none of the other species normally seen there in the late spring/early summer.

Roxanne did all the driving, but we stopped a couple of time to get out of the car and walk parts of the trail or explore the boundaries of the park-and-stretch areas. Some of the vernal pools on the site were in bloom: all golden yellow and purple with Goldfields and Downingia. Just beautiful.

Although the species list at the end of the day wasn’t as long or as varied as I’d like, I did like the fact that I saw a few things I’d never seen before and learned more about some species than I’d known before. That’s what really makes these outings fun.

A large fly landed on the passenger side mirror of the car partway through the auto-tour and at first I thought it was a Robber Fly (those guys are pretty big). We were both intrigued by the fly’s huge goggle-like eyes and his tenaciousness.  He held onto that mirror for quite a long time.

When I got home, I looked up the fly to see if I could find its scientific name and found that it was actually a male Striped (or Lined) Horsefly, Tabanus lineola. I’d never seen one before. And, of course, once I find something new to me, I have to research it more.  Never having encountered a Horsefly before, I was surprised to learn that although the males drink nectar, the females drink blood (usually from large mammals like livestock). She had scissor-like mouth parts that slice into the skin so she can get to the blood. This species is usually found along the east coast and Gulf of Mexico, so it was something of a surprise to find it here… assuming I got the ID correct.

We also got to see a male Red-Winged Blackbird flaring his epaulets at a female, and a pair of Brown-Headed Cowbirds performing what we thought was courtship behavior.  The two birds sat across from one another, then one ruffled its feathers, opened its wings a bit and bowed down at the other, and the other responded in kind.

Roxanne and I inferred the behavior was “courtship” but, from what I read, after I got home, what we were seeing was actually two males trying to outdo one another in a machismo contest.  Apparently, the females don’t respond well to the males’ bows, which they see as aggressive, so the males only bow to one another. (You can read more here.)  The males open their wings to one another, and to females, to show how mature they are. Juveniles have pale markings on the inside of the wings.

You can see the video snippet I took of the birds HERE.

And we found a couple of Black Phoebe nests, one stuffed full of babies who were almost fully fledged. They were stacked up, one on top of the other, with their tails sticking out over the edge of the nest. And toward the end of the auto tour route we came across a dead tree where there was a Western Meadowlark, a Red-Winged Blackbird and a tiny Song Sparrow all singing their respective songs.

We caught glimpses of American Goldfinches and Bullock’s Orioles, and hear Bitterns, but didn’t see any. One oddity was sighting a Mute Swan in the permanent wetlands area. That was odd because swans hardly ever go into the refuge, and Mute Swans are actually an invasive species. Unlike the Tundra Swans, the Mute Swans are super-aggressive and destroy the habitat they live in by ripping up water-plants from the roots.

When we were done at the Sacramento refuge, we decided to go over to the Colusa National Wildlife Refuge to show Roxanne the day-roost of the Black-Crowned Night Herons at the end of the auto-tour there. We were astonished to discover that the auto-tour there was roped off so no one could get to it… but the rope and signage was only visible AFTER you entered the refuge and started driving down the route. Stupid. They should have put the signs on the front gate or in the parking area.  A “manager” who showed up a little while after did, said that the auto-route was shut down because they were short handed and couldn’t patrol it well enough. Sad.

So, we didn’t do that tour and instead walked around a little bit in the native flower garden they have near the restroom facility.  Along part of a path near the garden, Roxanne found some galls we’d never seen before: the gall of the Elm Balloon-Gall Aphid, Eriosoma lanuginosum.

According to what I’ve read, the galls are initiated by a “fundatrix”, a parthenogenetic female aphid whose presence causes an extreme enlargement of the soft cell tissue on one side of the leaf. The galls are hollow and feel rubbery. They start out green and are covered with fine white hairs (which we saw) and turn brown as they age.

Inside the gall the fundatrix has her babies which are wingless and yellow until they mature. There can also be second generation aphids, called “alates” (usually winged individuals) which are dark green to black and wax powdered. Not all of the adults grow wings, however, and wing-growth seemed to be associated to crowding inside the galls, a short supply of food, and/or changes in the environment. Nature is so cool!

After walking around a bit, we headed back home to Sacramento and got there around 3:00 pm. 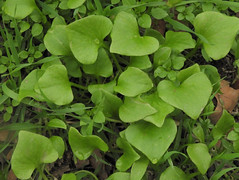 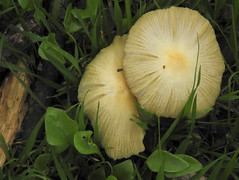 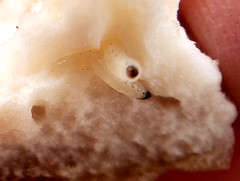 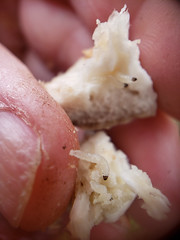