I got up around 5:00 am this morning so I could get out to the Effie Yeaw Nature Preserve before it got too hot outside. The predicted high for today was 100°. When I got to the preserve, it was already about 67° outside.

Just seconds after I arrived, my CalNat graduate/friend, Roxanne M., showed up to join me and so did “The Other Mary”, Mary M., another volunteer trail walker at Effie Yeaw.  She brought a small bag for me filled with blackberries from her yard. I thought that was so nice of her.

The three of us walked for about 3 hours, but we cut out walk short because it was humid and hot at the river. When we left, it was already about 80°– and it was only a little after 9 o’clock. Pleh!

We weren’t expecting to see a lot, because nature is kind of in a transition period right now. We’re waiting for mammal babies to be born and insects to start showing themselves.  And, we didn’t see a whole lot, but Roxanne and I can always find something to look at and focus on.

Roxanne is doing a seed-collecting thing right now for the naturalist class, and so she stops at different plants to see what kind of seeds they have on them and how the seeds might be disbursed.  She took on this project on all by herself and is volunteering all the time it’s taking her to collect specimens and ID the plants.  I’m so proud of her!

On our walk we saw a group of about four deer including a young buck in his velvet and a very pregnant doe. And later on, we also saw a bunch of baby rusty-headed Common Mergansers zooming down the riverside with their mom. It was so cute to see some of the babies swimming with their face down in the water, like the adults do, looking for things to eat.  Roxanne, The Other Mary and I all tried to get photos of them, but they moved so-so fast, it was really hard!

I also stopped to get some video of a hive of Common Black Ants (yeah, they’re really called that) carrying their larvae from one nest to another — most likely because the old nest was compromised in some way (infested with fungus, collapsing, etc.).

Moving the eggs and babies around can be really risky because they make for tasty treats for other insects and some birds, so the workers who carry them (very gently in their jaws) have to move really fast and know right where they’re going.

Queen ants are pretty awesome. They control the sex of all of their offspring (only creating males when it’s time for nuptial flights; ost ants you see are females); they can live for up to 15 (some say 30) years, and only mate during their nuptial flights… which means they can mate with several males during that short-term flight period, and then hang onto the sperm for the rest of their entire lives.

On our way out of the preserve we noticed leaves with circular cutouts on them. They’re made by Leafcutting Bees (Megachile sp.), a kind of native bee that lives in cavities. They use the bits they cut out of the leaves to line their tube-like nests and build a neat row of individual compartments, in each of which they’ll form a small doughy mound of pollen and nectar. On top of each of these mounds, the bee will lay a single egg.

Mother leafcutters can control the gender of their offspring, and often lay the eggs of their female offspring in the back of the tube-nest and the males in the front. This way, if the nest is invaded by a bird or other insects, it’s the males that will die first, leaving the females protected.

Although they’re solitary bees and don’t produce a lot of offspring, leafcutters are great pollinators. You can encourage them to pollinate your garden by building nesting boxes, called “bee condos”, for them in your yard. Here is a guide from the Xerces Society on how to do that: http://ow.ly/MhVf50uygX1. 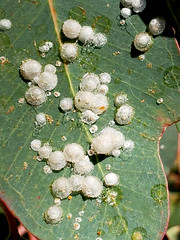 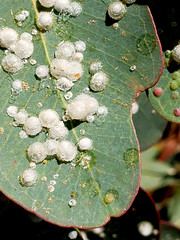 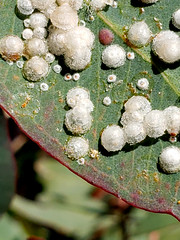 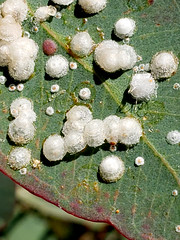