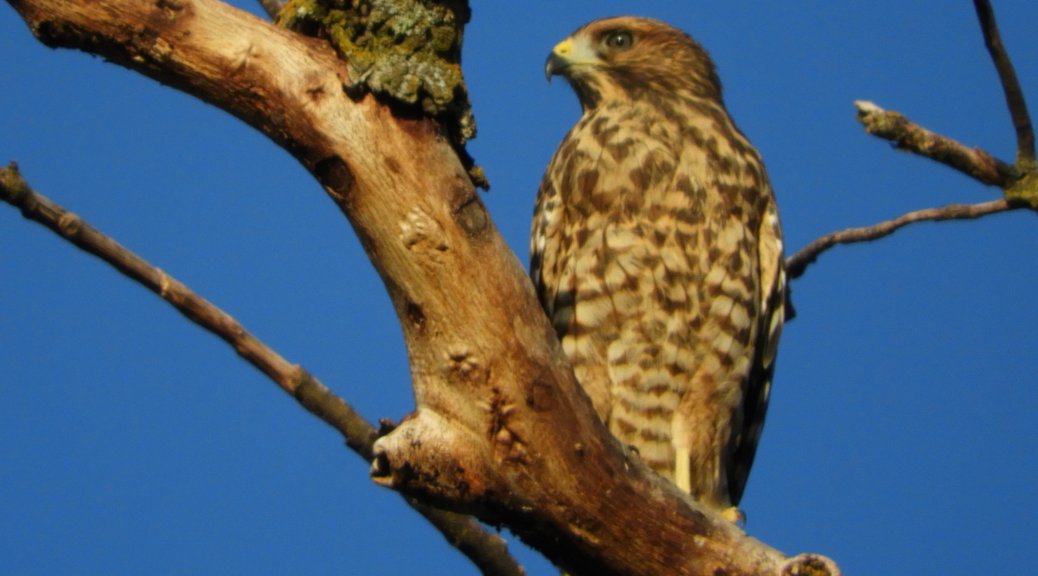 I headed over to the Effie Yeaw Nature Preserve again for a walk. The weather was lovely all morning, so the walk was a pleasant one. The only thing that kind of messed up my morning was that I was lost in thought while I was driving to the preserve and overshot it by about 10 miles. D’oh!

The Black Phoebes, California Scrub Jays and Red-Shouldered Hawks seemed to be out about everywhere. I think many of them were fledglings just learning how to fly and hunt for themselves – so they were kind of conspicuous.

CLICK HERE for the full album of photos and video.

At one tree, a young hawk flew up into the bare branches right next to a European Starlings nesting cavity nest. The parent birds, seeing the hawk, flew into the tree next door – their beaks full of worms and bugs for their babies – and just stood there waiting for the hawk to move on. I could hear the fledglings in the nest – who could see their parents – clamoring to be fed.

At another part of the trail, I saw a Red-Shouldered Hawk fly low across the floor of the forest with something in its talons, and then perch up in a tree right across a clearing from where I was walking. It looked like the bird had gotten a fat crayfish, and it spent several minutes ripping the thing apart and devouring it before it flew off again with a series of loud shrieks. I was able to get still shots and video of the bird while it was feeding.

I could also hear lots of Nutthall’s Woodpeckers around, but even though they’re noisy and announce themselves when they fly, they’re fast and it’s hard to get any good shots of them. I only got one in the camera’s eye and only got a few photos before it took off again.

The other critters that were out en masse were the ticks. I used repellant spray before I went out, but I still got attacked, and ended up taking six home with me – that I later found attached to my clothes and torso. Eeew! I know they have their place in the ecosystem, but I hate those things. 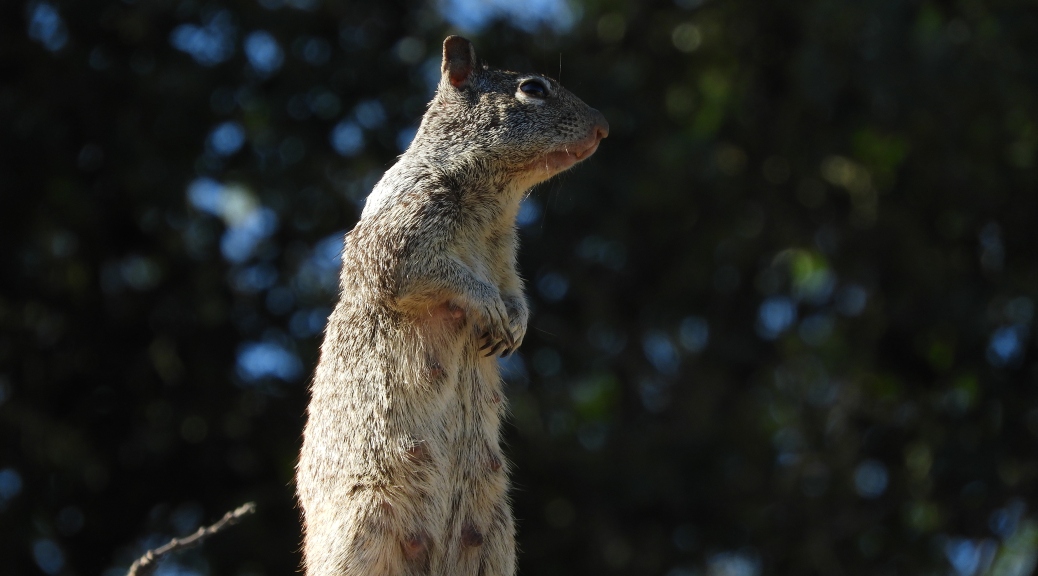 I was able to see several deer, including a pair that were foraging along the banks of the river.  There were also a lot of Red-Shouldered Hawks flying around: parents teaching their kids how to hunt.  And I also came across a mama California Ground Squirrel who gave out a sharp alarm call when I got too close to her burrow.  I was sure there were babies around there, but I didn’t see any of them…

About halfway through my walk I remembered that a Facebook friend of mine, Charlotte G., said she had a Nikon camera like mine and suggested I try the “birdwatching” setting for some great photos.  My  camera is so new I hadn’t gotten around to trying the special settings yet, but I tested out the “birdwatching” setting and was REALLY impressed by it.  (Thanks for the tip, Charlotte!)  It goes beyond the regular telephoto settings of the camera, makes the focal point tight, and lets you “ratchet” in to get closer and closer and closer to your subject.  For example, using the regular telephoto setting I could get the whole body of a Mourning Dove in a tree about 100 feet away into the viewfinder and focus on it.  With the “birdwatching” setting, I could get the camera to tighten up the image even more until only the bird’s head was showing in the viewfinder but still entirely in focus.  So cool!  It’s like getting a telephoto boost.  (And, of course, it works on other critters, too, not just birds.)

On my way out of the preserve I came across a male Wild Turkey that was standing in the sun, chin down on its chest, like it was sleeping.  As I got closer to it I realized the posture may have meant the bird was in a lot of pain.  Its whole face was swollen, and the eye on one side was damaged.  There were signs around some of the trail warning everyone about ground-dwelling Yellow Jackets in the preserve. It looked to me like this turkey may have blundered too close to one of those nests and the wasps attacked its face.  I felt so bad for it; it must have been in soooo much pain. (When I got back home, I emailed photos of the bird to the preserve to see if their rangers could help it.)

There is a disease called mycoplasma which can affect turkeys and cause swelling of the face, but its associated with the sinuses. This looked more “hot” and painful than that…

DAY 6 OF MY VACATION. I got up around 6:30 this morning and headed out to the Effie Yeaw Nature Preserve for my walk.  It was another gorgeous day, weatherwise – I’m lucking out so far on this vacation with great weather – 55º when I headed out, and up to 70º by the late afternoon.

The first thing I saw when I went into the preserve was a Yellow-Billed Magpie bopping along a lawn area. They’re endemic to the Central Valley (found here and nowhere else on Earth), so it’s always fun to see one… Then I saw a mama mule deer with a yearling, a little boy just starting to get his antlers.  He was very skittish, and ran off behind some brush, but mom was calm and just stood her ground while I walked past her.  She looked pregnant  — it’s that time of year.

At another nest, the Wren parents were having a fit because a Fox Squirrel had figured out which tree cavity their nest was in, and was trying to rip into it to get to the eggs.  The entrance to the next was on the underside of a branch that was hanging low near the ground.  I tried to get video of it, but there were weeds in the way, so it’s hard to see anything.  The squirrel wasn’t successful in getting at the eggs – at least nit while I was watching it… You normally think of squirrels as nut- or seed-eaters, but their diet is very varied and often includes birds’ eggs, fruit, and insects…

The one thing I was hoping to see at the preserve was the Red-Shouldered Hawks who have a nest near the nature center there, but when I started out on my walk, I couldn’t see the birds (or the babies I was hoping they had).  Last year, they had two babies.  On my way out of the preserve, though, I looked up and could see the fluffy white head of a baby poking up from the edge of the nest.

I walked around until I could get a better view of the nest, and was awarded with a view of the baby – starting to fledge – as it stood up and walked across the nest.  Then mama flew in to check on him… and I could hear papa screeching from somewhere nearby.  As I continued to watch the nest, I realized there were TWO chicks in the nest not just one… So the parents had twins again!  That was a nice way to end the walk!