Up at 6:00 o’clock and off to William Land Park by about 6:20 am. The park was hosting the Banana Festival there today so parts of it were closed off and parking was a bit more difficult, but I stayed away from all of the festival stuff and just walked around the ponds and the WPA Rock Garden.

The garden has been pretty burnt by the summer heat, but there were still a few things to photograph.

The middle pond at William Land Park is grossly overwhelmed by Sacred Lotus ((Nelumbo nucifera) plants. So many that only a fraction of the water was clear enough for the ducks to swim in. The rest of the pond was inundated with plants which are all very lovely at this stage, when they’re blooming, but, although they’re native to the US (specifically Florida), they are considered “invasive” here in California. When they proliferate, they can completely take over a waterscape; and because their huge leaves cover the surface of the water.

At the large pond, which was clear except for a little alga, I got to see a few more birds, including a couple of mama Mallards with their ducklings.

I walked for about three hours and then headed back home.

Up at 5:30… mostly because it was already warm in the house and I don’t sleep well when it’s hot.  I decided if I was going to get any exercise today, I’d better head out fast before it got too warm outside to do anything, and I was shocked to find that it was already 71º outside!  And it was humid.  What’s up with that? It got up to 101º today…

I headed over to the WPA Rock Garden and William Land Park, because it was a short distance away and I hadn’t been there in a while.  There were still flowers in bloom there – including the giant artichoke thistles which I think are so pretty – and the walk was shaded for the most part.  I came across one young Anna’s Hummingbird that I think was either just testing out her wings or was totally last, I’m not sure which.  She would hop-fly to a branch near flowers, have a drink of nectar, hop-fly to another branch, have a drink of nectar, hop-fly to a leaf cluster, have a drink of nectar.  I saw her fly out a few times, but didn’t see her hover to get a drink at the flowers for any length of time.  Maybe it was too warm for her already, too, and she didn’t want to exert herself…  Her sitting in the branches, though, made it easy for me to get some photos and a video snippet of her…

There were some Canada Geese by the middle pond with goslings that were still in their yellow fuzz; and I found a mama Mallard with three fuzzy babies.  They had all just come out of the water and were cleaning off their feathers/down.  Then the babies tried climbing under mom. Even though they were still in their fuzz, they were really too big already to fit under her neatly, so their little heads and butts poked out from all around her.  Hah!  I’ll post photos next week…

Because of the humidity and the fact that the air was heating up fast, I only walked for about 2 hours and then headed back to the house.

After breakfast on Friday, I checked out of the hotel where I worked on the Big Day of Giving for a 24 hour shift, and went in to the Tuleyome office to unpack stuff that had to be returned there, went through the mail, and sent off some emails… Then I headed back home. I felt I needed a nature fix to help clear my tired, fuzzy brain, so I stopped briefly at William Land Park, to walk through the flowers and see the duckies there.

CLICK HERE to see an album of photos and videos.

The WPA Rock Garden there is looking lovely this time of year; lots of different flowers and trees in bloom. Between the flowers, the fennel plants and the Spice Bush, the air was filled with fragrance…

Around the pond there were the standard ducks and geese, including one pair of ducks with 10 ducklings. The pair was made up a male Mallard and a larger female Cayuga-Swedish Blue hybrid, so some of the duckling had Mallard markings, and some of the babies were all black with tufts of yellow on them. The cutest thing about the babies was that some of them had black legs and toes, but the webbing between the toes was bright yellow, as was the underside of their feet… Mallards hybridize easily, and most of the ducks around that pond have intermixed at least once, so there are a lot of “odd ducks” walking around the pond.

I also saw a baby Red-Eared Slider Turtle in the water, about the size of a 50¢ piece swimming in the water. It followed me for a bit, then swam off, then came to the surface, then swam off again… It made me smile (even though that species of turtle is actually invasive.)

I walked for about an hour and then went on to the house. 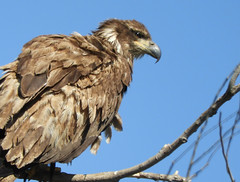 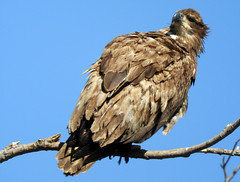 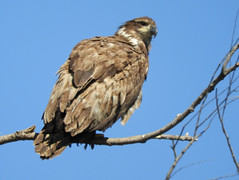 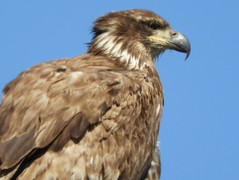