The naturalist class went very well again today. Roxanne, our volunteer couldn’t come, but co-workers Nate and Bill did all the heavy-lifting so I didn’t have to rearrange furniture to get the room set up and taken down again. I so appreciate their help and support.

Nate had brought our spokesbears, Berry and her cub Essa [as in “Berryessa”] so the class could meet them. Berry goes to our tabling events, and Essa goes with Nate on most of our hikes and outings. They make for great conversation starters and photo ops. Nate had also purchased some home-made cookies from the local Cookie connection shop to share with the class.

Our guest speaker for the afternoon was Kate Marden, the owner and founder of West Coast Falconry, who brought along four owls to share with the class. Some of her birds have been featured in movies and documentaries. She brought: a male Great Horned Owl named Tigg’rr (because these owls are also known as “Tiger Owls” for the barring on their chest and belly); a female Barn Owl named Amadan. Her whole name is Amadan Ban Bheag, which is Gaelic for ‘Little White Fool’. A female Eurasian Eagle Owl named Cailleach (pronounced Kay-leesh). Her name means ‘Wise Woman’ or ‘Crone’ in Gaelic; and a male, gray morph Eastern Screech Owl named Wee Hamish. He was very afraid of Berry, so I had to carry her out of sight behind the projection screen, and all the while Hamish was watching me with his eyes real wide. He was also something of a bad boy. As Kate was lifting him out of his carrier she realized he’d chewed off and swallowed one of his jesses. Hah!

Kate was wonderful, as usual. Her talk was very heartfelt and informative, and she walked around the room with the birds so the students could get a close look at them and take photos if they wanted to. We always love having West Coast Falconry come out for a lecture.

You can see a longer video of Kate and Cailleach here: https://youtu.be/0jEc7gIqiJk

You can see a longer video of Kate and Tigg’rr here: https://youtu.be/n1Uk1B9UviA

I got up around 6:30 and headed over to the American River Bend Park for a walk. I wasn’t expecting to see a lot there because we’re kind of in between seasons right now – and I didn’t see much. But the exercise was good for me. It would have been a perfectly lovely morning walk had it not been for a large family group who’d been camping there overnight. When they got up, just as I arrived at the park, one of the kids started scream-“singing” at the top of its lungs and wouldn’t stop. No respect for the space or other visitors. The noise didn’t abate until its parents fed it breakfast.

Most of the photos I took on my walk were of scenery – everything kind of rusty looking as we head into fall and winter. In the dusty dirt along the side of the trails, I was able to make out some animal tracks, including those made by deer, raccoon, Wild Turkeys… and Western Fence Lizards: tiny footprints on either side of the long center drag-mark left by their tails.

At several spots along the trail, I saw a big coyote. It kept itself just out of clear view – so taking photos of it was difficult – but I got it a few times staring right me through the scrub. I also found a couple of places where it had stopped to relieve itself and was kind of surprised to see its poop filled with acorns and wild grapes. Based on its size and how healthy it looked, I thought there would be more animal traces in its scat. Maybe it was a vegan coyote. Hah!

Along the river I saw Canada Geese, a tiny Spotted Sandpiper (without its spots), a Western Gull and a Great Egret. I also saw some House Wrens checking out a possible nesting cavity in the side of a Valley Oak tree.

Oh, and I saw a small flock of Sandhills Cranes flying overhead, clattering to one another. In another month, lots of migrating birds should be flooding into the region.

I headed home after about 2 hours.

Up at 6:00 am to go over to the William Pond Park on the American River. I went looking for wasp galls and found them, but it seems to me there isn’t the variety there that there normally is. Not a lot of other stuff to see, although I did hear a pack of coyotes, and I saw a covey of quail – but I couldn’t get photos of them. I walked for about 2 ½ hours and then went home.

It rained overnight and was mostly cloudy and drizzly on and off all day today.  I got up a little after 6:00 am and headed over to the American River Bend Park to see how the water levels are looking there.  I took an umbrella but only had to use it for a little while. And it’s on its last legs so it kept turning inside out all by itself, without any wind prompting it.  Time to get a new one…

Because it was chilly (about 45°) and mizzling, I didn’t get to see a lot of critters, but I did see more beaver-sign along the river – which has receded considerably.  In some places there is now the long swath of gravel before you get to the water. But in that swath is a lot of sand that got churned up and deposited when the river was raging, and a lot of debris: tree limbs, flotsam, garbage…

Anyway, back to the beaver stuff.  I found old scat, and another tree that had been gnawed almost all the way through.  What was weird was that under the spot where the beavers had been chewing the trunk was covered with white, frothy, almost rubbery stuff that looked like latex.  But cottonwoods don’t product latex.  So what was the stuff?  When I got home, I did some research and I think the beaver-wounded tree was suffering from “Alcohol Flux Syndrome” a bacterial infection that was probably living in the tree well before the beaver got to it.  One of the symptoms is white frothy foam that exudes from the bark and smells like fermentation…  This stuff actually had a faint odor to it but it was more like the smell of Elmer’s glue than fermentation…  When I touched it, it felt like rubber, and when I pulled a section away from the bark, you could see froth left behind on the tree…  Weird.

CLICK HERE for the entire album of photos and video snippets.

The manroot vines and pipevines are all going great guns and should be ready for the butterflies and caterpillars when they emerge (probably sometime later this month).  And there was one spot along the muddy bank where I thought I found bobcat tracks.  I was trying to get a photo of them, but the ground under my feet there was so slippery with muck that I couldn’t keep my balance.  I got a couple of shots, but you can’t really tell much from them.

At another spot, I came across a Great Egret and a Snowy Egret fishing in a still pond that had been left behind when the river receded.  Lots of tiny fish must’ve been trapped in the pool because I got video of the Snowy Egret catching about a dozen fish in less than two minutes.  I don’t know if the Great Egret was just super-picky about wat he’d eat or if he just sucked at fishing; I didn’t see him catch anything.  Both egrets were coming into their breeding plumage: long trailing and curling feathers down their back and over their tail.  So pretty.

I also came across a small herd of mule deer which included a buck that had lost one of his antlers. (They shed them this time of year.) The lack of symmetry didn’t seem to bother him or interfere with his ability to walk or graze, but it sure looked funny.

I walked for about 2 hours and then headed back home.

It was so pretty outside, I felt compelled to go walk somewhere for a little while after my meeting. So I went over to William Land Park.  I couldn’t get near the ponds — they’re under construction, getting cleaned out and replanted — which was kind of a bummer.  But the critters don’t care that fences are up, so they were in the water: ducks, geese, a cormorant, lots of turtles… I also got a lot of photos of squirrels, which are always fun to watch.

No part of this website may be reproduced, distributed, or transmitted in any form or by any means, including
photocopying, recording, or other electronic or mechanical methods, without the prior written permission of the author.  The phrase “Chubby Woman’s Walkabout” and all of its associated uses are Trademarked™ by Mary K. “Mare” Hanson. 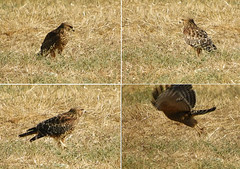 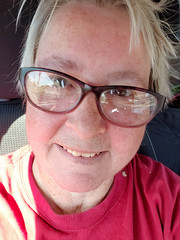 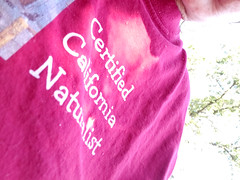 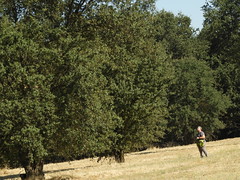